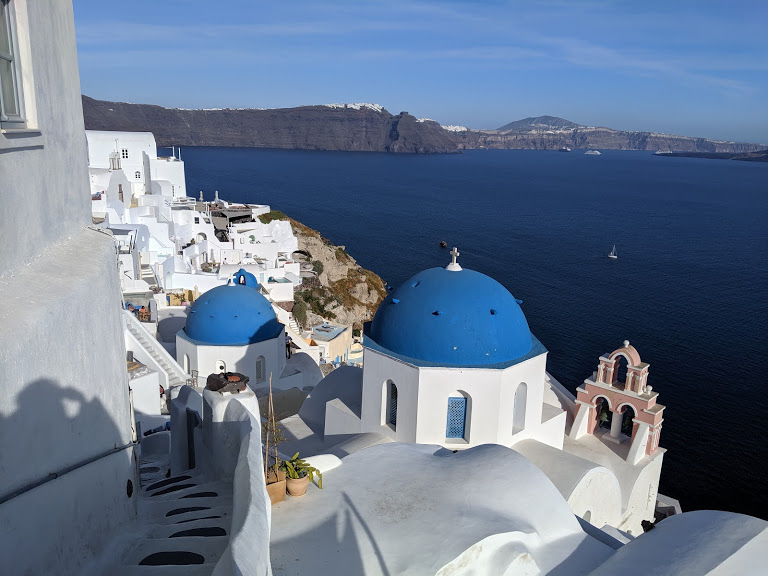 We just recently returned from a two week trip to Greece in May. It was an eye opener.

First, it was so impressive to see snow-capped mountains in the distance, not only on the mainland but on the island of Crete.  With 6,000 islands and islets scattered in the Aegean and Ionian Seas (of which 227 islands are inhabited) there must be other snow- capped mountains on some of the other islands as well.

The mountains of Greece are beautiful.  Not many roads run through them and they are not very populated. Meteore is an absolute must see!  It reminded me of the book, Lost Horizon!  There are about 100 Greek Orthodox monasteries and convents in Greece. The few we saw were perched on bluffs in the mountains and were truly amazing. The views were outstanding!

The respect and preservation of Ancient history was remarkable. Almost every town and island we went to have an acropolis with ruins of temples honoring particular Gods or other ancient archeological sites well preserved.

The Parthenon, in Athens, stands at the highest point in the city. The temple to the Goddess, Athena, was designed by the architects of the time. The columns appear symmetrical from the distance but in fact they are purposely not evenly placed or parallel to one another! They were purposely designed that way to appear as though they are from the distance! Amazing!  Construction began in 447 BC when the Athenian Empire was at its peak.

The ruins everywhere we traveled were spectacular. The location of the original Olympics was a thrill to visit! To walk on the same track as the original Olympiads was quite an experience!  The Ancient Minoan city of Knossos on the island of Crete  is near the hill of Kephala which was the site of the first Neolithic settlement inhabited continuously since 7000BC!  It morphed over the next millennia into the rather advanced Minoan City of Knossos with a four story palace of Knossos ca 1,450BC. There appears to be a strong Egyptian influence as demonstrated by the art work. Fascinating!

The charm of the islands, especially the island of Mykonos and the whitewashed blue accented buildings of Santorini, cannot be ignored – both beautiful.  The Greek cuisine was enjoyable there  as well! Every island we visited was laden with history, ruins and myths. Each island we visited – Patmos, Crete, Rhodes, Santorini and Mykonos offered unique and rich cultural experiences and are so worth exploring.

Word of warning though- if you wish to travel to Greece to experience the iconic sites during the tourist season from May to September be prepared for crowds. Also many of the restaurants and souvenir shops prefer cash or a combination of cash and credit card.

Greece is an interesting country filled with natural beauty, ancient history, myths and culture. The people are gracious and proud of their heritage. The flora is outstanding with about 6,000 varieties of flowers, not to mention thousands of olive trees! Greece should definitely be placed on your bucket list of places to visit!